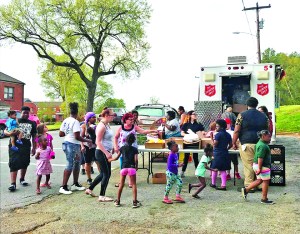 Say “food desert,” and the first thing that comes to mind might be an impoverished, inner-city neighborhood in a major metropolitan area. But places where people without transportation struggle to obtain decent, healthy food also can be found in smaller cities and rural areas.

Lieutenants Cheryl and David Moynihan, Salvation Army corps officers in Jackson, Tennessee, received a vision from God last summer about the food deserts in their community.

For residents of one of the low-income areas they serve, Lincoln Courts, “it’s a good hour to an hour-and-a-half round trip walk for people to get to the closest grocery store that sells fresh produce and foods they can make meals with,” Lieutenant Cheryl said.

“Even for those who have been given food stamps, it’s really difficult for them. Many are single parents with young children. The roads don’t have sidewalks, and it’s not an easy trip to get back and forth to the store with kids in tow.”

So, the Jackson Corps applied to West Tennessee Healthcare’s “Well Tank,” a “Shark Tank”-like competition for nonprofits and others seeking to improve health and wellness in their communities.

The corps made its pitch to a panel of judges and last summer was awarded a $10,000 grant for a “ Community Canteen.” An Emergency Disaster Services mobile feeding vehicle, loaded with fresh foods, visits neighborhoods with few easy grocery options.

The corps gets fresh fruit and vegetables, fresh milk, frozen meat and occasional bakery goods through a partnership with the Mid-South Food Bank in Memphis, Tennessee, and donations by local retailers like Sam’s Club and Target.

The Community Canteen started rolling last August. Since then, it’s distributed 100,000 pounds of food at two sites. Upwards of 1,000 individuals benefit each week, with 275 to 300 families served.“We go out once a week, on Wednesdays,” Lieutenant Cheryl said. “About 11:30 a.m., we head to Lincoln Courts. We’re there for maybe an hour and a half or two hours, giving out food until it’s gone. Then we come back and load up the canteen again and in the afternoon go to Allenton Heights, which is right across the street from our building.”

With children home from school in the coming summer months, the corps also will be starting a sidewalk Sunday school, a ministry to youngsters while their parents are shopping for food. “We are getting partners to adopt a day to do cooked meals for the children,” Lieutenant Cheryl said.

The canteen also ministers spiritually to the grownups.

“We’ve noticed a huge difference in the countenance of the people, the way they respond to us, and their willingness to open up and have conversations,” Lieutenant Cheryl said. “We’ve had probably 100 people pull us aside and ask us to pray with them, or have expressed interest in volunteering.”

The Jackson Corps is starting a media campaign to rally community support. The corps serves a seven-county territory, and the hope is eventually its canteen can visit a different area each week.

“We want people to know we’re out in the community to help,” Lieutenant Cheryl said, “because that’s what Jesus called us to do.”

A Huge Thanks to Target from Students in Oklahoma & Arkansas