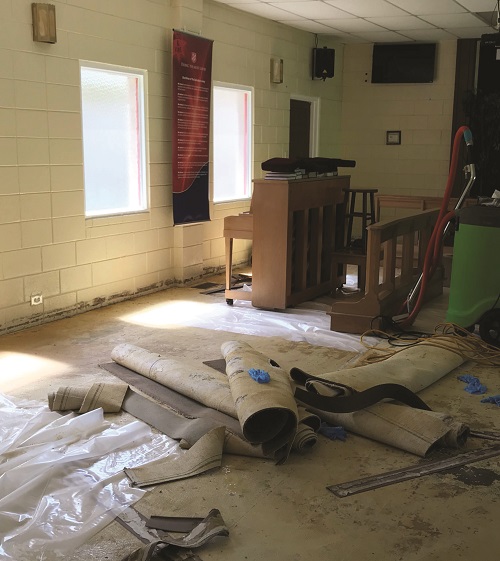 Most of the destruction wrought by Hurricane Sally happened in Alabama and the Florida Panhandle on the Gulf Coast, but it only took part of the storm brushing past to cause havoc with The Salvation Army corps in Brunswick, Georgia, on the Atlantic.

“Although we did not get a direct hit, the storm pulled moisture from the Atlantic across our area as it built into a hurricane, giving us about 10 inches of rain in isolated areas, mainly downtown Brunswick,” said Sergeant Pamela Starr, administrator at The Salvation Army of the Golden Isles. “The early morning of Sept. 16, we received several inches of rain in just a few hours.”

About 1½ inches ended up inside the chapel and fellowship hall of the corps building. Carpeting, floor tile, and wooden furniture and doors were total losses. Not to mention there’s mold and mildew in the walls and baseboards. The altar also was water-damaged and will have to be refurbished.

“We don’t use the building very often, so we didn’t find the damage until about 36 hours after the storm,” Sergeant Starr said. “By the time we called ServPro, so many other people had reported losses, we were last on the list.”

Across the street, the corps administration building sustained minor damage from a leaking roof. The Red Shield Services shelter came through unscathed. The mobile feeding unit (canteen) was parked outside and had water up to its floorboard and in the cab and rear of the vehicle, “but a wet vac took care of that,” Sergeant Starr said. “Our van was watertight and did not sustain damage.”

Things could have been worse. Earlier this summer, the corps replaced the wooden pews in the chapel with individual chairs. The pews surely would have been lost, but the metal-legged chairs, their upholstered fabric high above the water, came through OK.

So did everything else on shelves off the floor, such as books and other materials. Happily, the water also stopped short of the piano, and the instrument survived, if out of tune.

All the undamaged stuff now goes into a big shipping container in the corps parking lot while clean-up and repairs continue. The corps is awaiting word from its insurance agent and expects to be out of its building at least two months.

In the meantime, Sergeant Starr said, “We are now going to have Angel Tree sign-ups in the shelter instead of the corps – even having some of it outside on the porch in order to maintain social distancing. You’ve got to do what you’ve got to do.”

Having vacated its building earlier this year because of the COVID-19 pandemic, the corps returned in August and had met only four Sundays before the flood. Now it’s back to “Church in a Box.” Sergeant Starr packs up boxes with written songs, prayers, Scripture reading, mission alignment message, lesson and other contents, and delivers them to corps families every Sunday morning.

“Just continue to pray for us. Really pray for us,” Sergeant Starr said. “It’s tough to be out of the corps building. We had just gotten back in there. We have a small congregation, and we’ve been trying to build it up, and then this happened. It’s a setback. But we were planning to start worship in the park; this will just get us out and about quicker.”

Coronavirus cancels train, but ‘Holiday Express’ fundraising is full speed... To Battle We Go: ‘Improvise, adapt and overcome’
%d bloggers like this:
Scroll to top