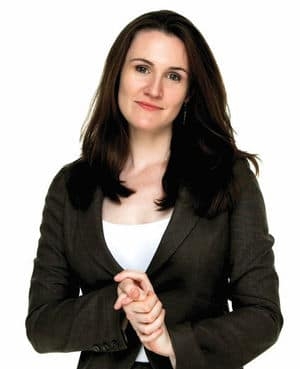 When Liz Murray overcame homelessness to graduate from Harvard University, people called her a bootstrapper and lauded her hard work.

There has to be a bridge — someone or something offering help and encouragement, she said. That could be a committed social worker, a friendly stranger, a scholarship fund.

“When you have that, an introduction to a person who can help you, it’s a bridge that turns hard work into opportunity,” she said.

In an interview Monday, Murray said it’s up to the community to be that bridge: “Nobody is off the hook.”

She said today’s Salvation Army event is part of the solution. Eight high school seniors each will receive a $10,000 scholarship at the luncheon. The awards are named after D.J. Sokol, the son of David and Peggy Sokol, who contributed to his school and community despite battling cancer. He died in 1999 at age 18.

Murray said she had lots of help and inspiration along her path. She went from being a homeless teen who missed school 75 percent of the time to making up lost courses in two years and winning a New York Times scholarship to the Ivy League school.

She was born in grinding poverty to drug-addicted parents, but she never was angry at them. Instead, she viewed the addiction as a terrible thing that happened to the family, which included a sister.

“I had an instinct for the fact that they were sick,” she said. “People can’t give what they don’t have.”

Despite that, they gave her plenty. She was grateful she grew up with two parents who showed her an abundance of love. With regular trips to the public library, her dad — who had two college degrees — planted the idea that education was a way out. Her mom taught her to dream when she shared her own dreams with her daughter at night.

In a roundabout way, they taught her to be independent. “I never expected people to do things, because no one did,” Murray said.

At age 13 she ended up in a difficult group home when her mom was hospitalized with end-stage AIDS. Dad was in a homeless shelter, and her sister lived with friends. By 15, she was homeless herself.

Her mom’s dreams of becoming sober and owning a home died when AIDS claimed her life. Murray took that as a signal that she should get serious about school to preserve her own dreams. She graduated from the Humanities Preparatory Academy in Manhattan despite a still-precarious living situation.

Strangers who read her story in the Times showed up to help: bringing brownies, cards, a homemade quilt. One woman drove from New Jersey each week to do her laundry.

Now, she said, she tries to do the same for teens in similar situations. She works with youths from Covenant House, the largest organization for homeless teens in the country. She looks for ways to introduce them to people who want to help with jobs, internships and other aid.

“I love to see people’s dreams come true,” she said.

She turned that coaching into a full-time business, but recently stepped back to have a family and pursue a doctorate in psychology from Columbia University.

She’ll share her story with the 1,100 people expected for today’s luncheon at the CenturyLink Center. She finds inspiration in the stories of each winner in the award’s 15-year history. They all have much to contribute, she said.

It’s up to everyone to help more young people figure that out, she said.

“One thing I hear people say constantly, when they’re talking about the ills of the world, is that someone needs to do something — ‘they’ need to do something. I ask: Do you realize there’s no ‘they?’ ”

The Salvation Army of Jackson, Mississippi celebrates a good day for doing good