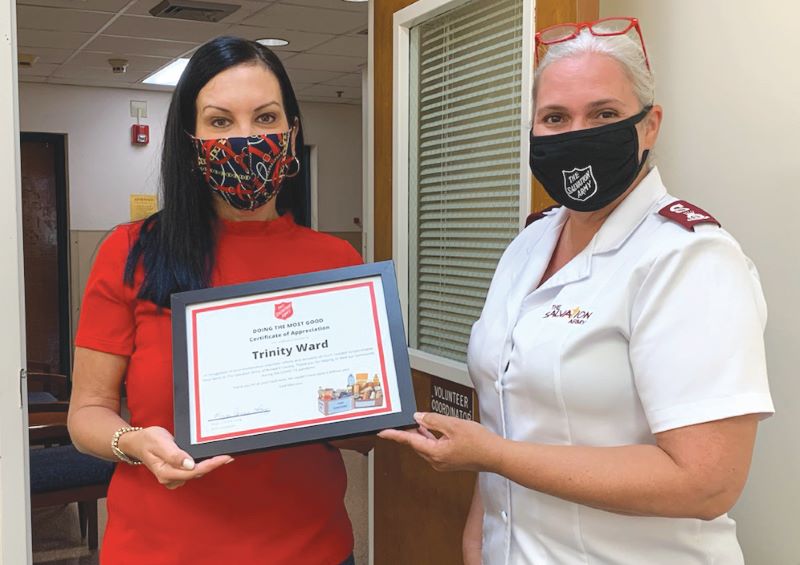 In May, a local news story aired on broadcast television in Fort Lauderdale, Florida, highlighting the growing need for food to stock The Salvation Army’s pantry in the area. Due to COVID-19, demand was already sky-high in Broward County, as it was in many communities globally, and the available supply wasn’t sufficient to serve all those who needed help.

“With lines wrapped around the building each week and demand so incredibly high, we’ve been asking more and more people for help,” said Robert Beasley, special events and community relations coordinator in Fort Lauderdale. “We simply need donations and even more support from the community in order to meet the increasing demand.”

One viewer of that local news broadcast was Trinity Ward, a Broward County resident who was not an active donor to The Salvation Army at the time. In short order, though, Ward reached out to Beasley and others with The Salvation Army, led by Majors Stephen and Connie Long, area commanders, on some ideas to make the greatest impact possible, as she was moved by what she saw and the opportunity to help.

One viewer of that local news broadcast was Trinity Ward, a Broward County resident who was not an active donor to The Salvation Army at the time. Moved by what she had seen, Ward quickly recognized an opportunity to help and wanted to share her ideas to make the greatest possible impact. She reached out to Beasley and others with The Salvation Army, led by Majors Stephen and Connie Long, area commanders.

“Trinity contacted me, and she said, ‘Rob, seeing Major Connie (Long) and seeing that The Salvation Army’s food pantry was running low really touched me,’” Beasley said. “Then, she shared with me that she didn’t have much food growing up and she could really relate to the challenges many are facing. Having been blessed, in her words, she saw the opportunity to give back and help us.”

Ward decided to organize people in her spheres of influence to gather as much food as possible, reaching out to family, friends and neighbors at the condominium community in which she lives. Donations from Ward and company have been frequent and prolific, with Beasley estimating that a staggering total between 600 and 700 pounds of “grade-A quality” food products arrived by early July.

“It is truly amazing to see Trinity and what she’s been able to do,” said Beasley. “Really, she was able to rally everyone, to bring everyone together, to support what we do. I think this is a great time to show the community what The Salvation Army does and how we help to impact those who are struggling in times of crisis such as this.”

Food donations from Ward and others are used to stock the food pantry and aid in ongoing service. Each Thursday, food is distributed between 9 a.m. and noon, with the only requirement being proof of residency in Broward County. Demand remains incredibly high due to mounting challenges prompted by COVID-19, but Ward’s donations continue, and her story has already inspired others to join in the fight.

“I think what Trinity has done is so great, especially now with the constant negative stories in the news,” Beasley said. “There is a lot of division and confusion in the world, but this, to me, shows the power of good and that we’re all interconnected. If you see a family without food, it can touch you and you want to do something about it. What Trinity is doing is fantastic and it starts with a decision to get involved and make a huge difference. We’re challenging folks to join us in serving the community, and she is truly a shining example.”