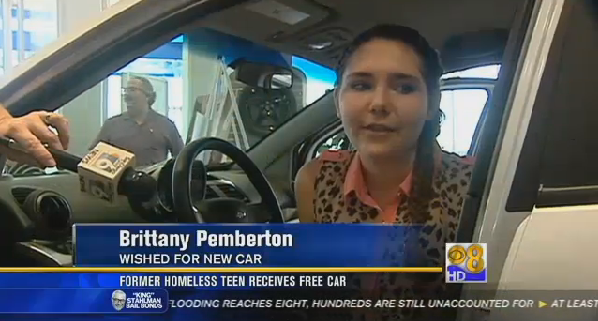 Brittnie Pemberton was just nine years old when she and her mother were homeless and living at The Salvation Army’s Door of Hope. Her father, sought help for substance abuse through The Salvation Army’s Adult Rehabilitation Program (ARC). Throughout this trying time, this young lady never lost hope that her dreams would come true.
And on Tuesday afternoon, one did.

While living at the shelter, Brittnie participated in a project called “Pictures of Hope,” where she was asked to take pictures of her hopes and dreams, one of which included a snap shot of San Diego State University. That dream became a reality a few years ago when a donor endowed a four year scholarship for Brittnie. Also included in this list was a wish to one day get a car.
Brittnie, now 16, was shocked when Chevrolet surprised the teen by unveiling a brand new car.

The 2014 Chevrolet Spark was given to Brittnie for being a “Spark of Hope” for America’s youth. She is an incredible example of hard work and great compassion as she splits her time between school and volunteering at the homeless shelter where she mentors children who are currently going through the same thing she did. Her proud parents are back on their feet and are serving as cadets in The Salvation Army.

At the presentation this week, she was led to believe she was there to be interviewed about her family’s past and their experience living in The Salvation Army’s homeless shelter. She had no idea what was in store for her.

Planting Seeds of Hope on the Frontlines in Tallahassee