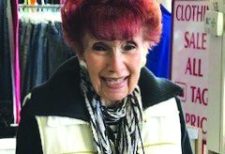 A few months before Fidel Castro took control of Cuba in the 1950s, Olga Lastra, her husband and two young sons left the country with the notion they would return shortly. However, time passed, and Lastra discovered her home had been taken over by the Castro-led government. By that time, her husband was working on an assignment as a civil engineer in the United States, and that positive fortune allowed for a smoother transition to a new place to call home.

Adjusting to the United States as the new home base for her family, Lastra decided to take a chance that a local boutique would hire her for work. She was, in fact, hired and quickly became a top salesperson. Her exceptional personality and passion for fashion fueled her work.

Lastra and her husband eventually retired in the Florida Keys, settling into yet another new home. Initially, she volunteered for the local animal shelter and was also a committed caregiver for an elderly woman. While accompanying the woman for typical errands, the duo decided to stop at The Salvation Army to do some shopping. Upon arrival, Lastra mentioned to the store’s manager that if she ever needed any help, she’d be just one phone call away. Shortly after, the manager called Lastra with a plea for assistance, citing an extreme situation with staffing and the need for a helping hand. The rest, as they say, is history.

Lastra has been a steady volunteer at The Salvation Army in Key Largo, Florida, for 27 years. Her love for helping others, coupled with her innate love of fashion, have been a perfect fit for her retirement years. Now 90 years strong, she still volunteers on a consistent basis and many customers, from one-time visitors to recurring seasonal regulars, come in expressly to say hello and visit with Lastra.

She regularly shares her passion for The Salvation Army, saying that the organization has been a salvation for herself. Following the passing of her late husband, she found comfort in her continued work in the store. Always the fashionista herself, Lastra continues to curate and maintain the store’s boutique, upscale handbags and jewelry departments and, in recent days, the store held a celebration for her 90th birthday.

Rebecca Corum is the manager of The Salvation Army Family Store in Key Largo, Florida.

Virtual commissioning sends Messengers of the Kingdom into officership

The Salvation Army of North Texas Distributes Meals in Neighborhoods Affected...
%d bloggers like this:
Scroll to top