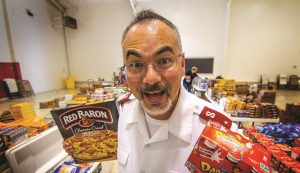 Hunger is an issue close to Lieutenant Dennis Smith’s heart: His mother told him of growing up in Korea when it was occupied by the Japanese, separated from her family at age 11, living on the streets and cooking and selling rice so she’d have money to buy her own food.

“It breaks my heart to know there’s a kid not getting a meal,” the lieutenant said. He and his wife, Lieutenant Jane Smith, are corps officers at Mercer County Corps in Princeton, West Virginia. “We hear so many different stories.”

One day this past spring, three members of the local Hiawatha Baptist Church came calling to ask if The Salvation Army would accept and distribute surplus food as it became available. The corps jumped at the chance.

“I call them our three wise men; they showed up bearing gifts,” Lieutenant Dennis said. “It started with a quarter-truck load of ice cream sandwiches.”

Since then, a box truck from time to time comes around to do a community food drop.

“It can bring anything from pizzas to Hot Pockets to packages of sausages to frozen vegetables to hot dogs to luncheon meats,” Lieutenant Dennis said. “We’re now trying to round up more freezers so we can store food and schedule a regular distribution one day a week.”

For now, though, it’s a mad scramble.

“Let’s say it’s a Thursday; they’ll call and say we’ll be there in an hour,” Lieutenant Dennis said. “I call in our volunteers, and they help me unload the truck and put things in the freezers.” When they run out of freezer space, “we’ll set up six tables like a grocery store so people can pick what they want.”

The corps then sends out a blast to the community by email and Facebook. With the food distributions, the corps has gone from fewer than 300 Facebook “likes” to nearly 1,400. The corps typically will serve 150 to 200 families a week.

But doesn’t giving away free food risk creating a dependency?

“That’s already happened,” the lieutenant said. “People call and ask, what time is the food coming? We have to explain that it’s not every week; it’s whenever they have food to give us. … It’s the same dependency we develop with the community when we give clothes out of the thrift store or help people with their utility bills.”

“What we’re doing to control some of that is to lower the amount of food people can take” – limiting a household to 18 items, three from each of the six tables, so a family doesn’t load up on all Hot Pockets or take more than it needs.

A greater principal is at work, Lieutenant Dennis said: “We want to foster a dependency on the love of Christ – a dependency that people know if there’s a need, we will do our best to take care of them.”

He estimated that since beginning the food ministry, the corps has seen an increase of as much as 20 percent in social services, to people who had no prior contact with The Salvation Army. The corps’ mission field is Princeton, Bluefield and a five-county region of rural West Virginia whose economy took a hit when the coal mines closed.

“We regularly invite people to come to church,” Lieutenant Dennis said. “We pray for them, and with them. Our hope is, this can become much, much bigger than just handing out food. Through this, people have started recognizing not just me in the community, but The Salvation Army in the community, and they’re very thankful.”

Study reveals Millennials are Charitable, Influential, & Eager to Connect Over a Cause

Joy in a Donut

Salvation Army Units in Southeast Texas Prepare to Respond to Flooding From...
%d bloggers like this:
Scroll to top