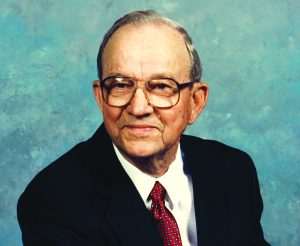 My father taught me to be self-sufficient, to do as much as I could for myself without asking others for help. I was the son he never had, with my own little tools during the week. But only Daddy could tie the sash on my Sunday dress into a beautiful bow. It was his philosophy that each of us enters this world with a “favor bucket” and we must use it wisely; otherwise, we may run out of favors too soon. I like to think of The Salvation Army as a “favor bucket” for anyone in need, whether it be for spiritual help, assistance with groceries or the power bill, or toys for children at Christmas. Each of us can make a difference, no matter how large or small the gift.

Over the years I’ve donated to the Family Store and to the Red Kettles at Christmas. On a cold winter day in early 2006, with the threat of snow and sleet in the air, I passed a fellow walking with a shopping bag of clothing over his shoulder. He had on a t-shirt and a flannel shirt but no jacket to keep out the cold. My first instinct was to take him to Wal-Mart to buy him a warm jacket, but today it is no longer safe to do so. Instead, when I got home, I wrote a check to The Salvation Army, sharing the reason for my gift, and noting that it was in memory of my father Foster C. Sprinkle. Daddy’s nickname was Pluto.

Within just a few days I got the loveliest handwritten thank you note from the commanding officer at the local corps, thanking me for the donation and saying that Daddy must have been a very special person to have raised such a caring daughter. I was so touched by the note that I went to the office and introduced myself. I learned that I could include The Salvation Army in my will and establish an endowment fund in my father’s name. It would benefit our local corps, supporting their operational programs and services and perpetually honor my father’s memory. Since then, I’ve had the opportunity to increase the amount designated for the endowment by naming The Salvation Army as the beneficiary of a life insurance policy and my bank accounts. I also set up a charitable gift annuity which provides me a small income, and at my death the remainder will also go into the endowment fund. I believe in the work of The Salvation Army, and it pleases me to know that much of what I have will benefit them in the future and will be a lasting legacy in memory of my father.

I encourage everyone to consider including The Salvation Army in their estate planning. Any gift, no matter how large or how small, can help the Army continue Doing the Most Good.

Anita Sprinkle Roberts is a longtime supporter of The Salvation Army and recently became a member of the Shelby, North Carolina, Advisory Board.

‘You were created to be full of grace’: Southern Territory welcomes Messengers of Grace session of cadets

Volunteers: The Army Behind The Army