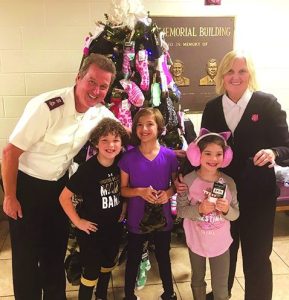 With the holiday season approaching and the potential for colder temperatures, a fourth-grade student named Zoey Brown sprang into action.

Zoey, who attends PVPV-Rawlings Elementary School in Ponte Vedra, Florida, was inspired by The Salvation Army’s Angel Tree program and, with a bit of help from her family, she created the “Tree of Warmth,” attracting attention from across the Jacksonville area.

Zoey, whose grandmother, Pam Brown, is the sister of Major Candice Biggers, drew her initial inspiration from an otherwise innocuous conversation during a family dinner.

“From my understanding, the trigger for this initiative was a conversation we were having during dinner with Pam, her husband, Steve, and their grandchildren,” said Major Keath Biggers, Jacksonville area commander.

“We were discussing the Angel Tree, and one of the children, Bronx, began calling it the ‘Homeless Tree’ by mistake. We shared how cool it was that he called it that, and how it would be great if something could come from his ‘mistake.’ Out of the mouths of babes – although he’s in elementary school – came an inspiration that the Brown family took to make a ‘Homeless Tree’ expression into the ‘Tree of Warmth,’ providing clothing accessories to protect against the cold.”

From there, Zoey urged her relatives to help, and the family purchased a Christmas tree, along with gloves, hats and socks. They used the items to set up the “Tree of Warmth” at The Salvation Army Towers Center of Hope in Jacksonville. Since then, hundreds of winter items have been hung on the tree for shelter residents and homeless individuals to take and use to stay warm during the cold-weather season in the region.

“Several hundred men, women and children have already been recipients of the tree, and it will continue serving during the winter months, especially when the temperature drops those cold nights,” Major Biggers said. “We thank God for Zoey, Bronx and the family making this a reality and a great service to those we serve in Jacksonville.”

Zoey’s family has been a long-time adopter of angels through the Angel Tree program and, with that backdrop of experience and the familial connection, the pathway was clear. Still, the inspiration was centered on improving the lives of others by any possible means.

“Knowing that you truly can make a difference in someone’s life is huge,” said Pam Brown. “I want the children to grow up feeling that way. I want them to know how wonderful it feels to help others. We can’t thank Candy and Keath enough for allowing the children to do this and helping them to get it set up. It really means so much to our family to participate in giving back.” 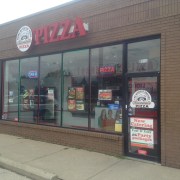 EBC Cadets aim for mission and ministry with 2021 Spring Campaigns 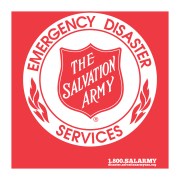 Salvation Army truck driver honored to do his part