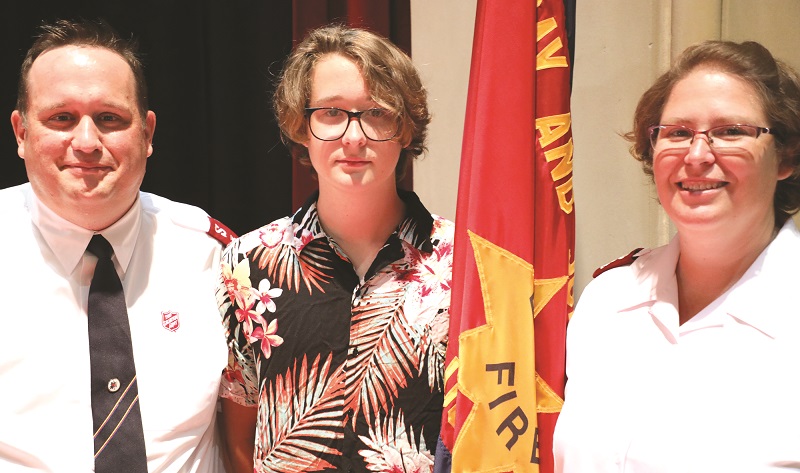 Cameron McClure is an otherwise typical teenager, except that he and his family are dealing with a diagnosis of Tourette’s Syndrome – a neurological condition which causes abnormal and sudden behavioral outbursts such as ticks, cursing (called “coprolalia”), and nonsensical noises.

However, Cameron has a secret weapon – a strong faith instilled by his parents, Majors Douglas and Storm McClure.

“As bad as this is,” Cameron said, “it’s not going to kill me, so I know that somehow I can deal with it. Why should I really be down about it?”

There is no cure for Tourette’s, and medications can merely help if the disease becomes severe. Young children usually display signs, although often these are nearly imperceptible until just before puberty, at which time more aggressive symptoms manifest. For Cameron, very slight ticks began at age 6, when he began scrunching his nose. A coughing tick was dismissed as allergy or perhaps asthma.

“Even if we had known about it when he was little, nothing would have stopped” Cameron’s diagnosis at age 16, his mother said.

That diagnosis came in January 2020. After returning to school following the Christmas break, Cameron was rushed to an emergency room with uncontrollable spasms and outbursts. His pediatrician was called in, and a neurologist took over the case.

“There is no test for Tourette’s,” Major Storm said. “A visual diagnosis consisting of two motor ticks and one vocal tick is required and must be pervasive for a year.” Since Cameron’s initial symptoms began 10 years ago, the neurologist made the call.

The family dynamics changed dramatically. Cameron had to give up, at least temporarily, his beloved euphonium. He had to begin home schooling, even before the COVID mandate came a month later. Since Tourette’s is a genetic disease, Cameron’s three younger brothers must be watched closely. All four boys are being home-schooled now, using the learn from home option, with Major Storm working as the learning coach.

“Being in school would be extremely difficult because he can only concentrate for about 20 minutes or so before he must take a break,” Major Storm said. “So, in that respect this has slowed his progress to learn – although his cognitive ability is still there.”

In addition, with the onslaught of the pandemic, Cameron is considered at “high risk” due to his neurological condition.

Interestingly, Cameron can temporarily fend off the surges of Tourette’s by concentrating on something else, like playing his euphonium. But there is a downside: suppressing can be painful and after the concentration ceases, “a pretty severe tick attack comes, so we stopped that for a while.” Different situations bring different reactions, and that makes consequences totally unpredictable.

Along with the family’s faith, there is much hope. Cameron is scheduled for an initial appointment in September at the Emory Tourette’s Center of Excellence in Atlanta. There the plan is for him to enter that program to receive therapy, instruction on how to redirect your ticks into something else, as wells as a host of neurologists, psychologists and psychiatrists available for his ongoing treatment.

The family’s faith notwithstanding, Cameron’s illness has taken a terrible toll, especially on his parents.

“It feels like you’re in this hole and you can’t get out,” Major Storm said. “It’s so hard to process it all. Just when you get your head around it, something else would come. Some other shoe would drop. It’s such a lonely and helpless feeling because as a parent you naturally want to help your child!”

“My prayer and hope,” said Major Douglas McClure, “is that God is using this situation to prepare Cameron and our family to be able to speak into a world that others do not know exists. There might be someone (out there) who is struggling with this, and we can be there for them. By sharing our story, a lot of people have come to us for advice – ‘How do I navigate this?’ We want to be open with what we’re going through.”

Cameron’s parents said it has given them a way to demonstrate their faith in a very real way in front of Cameron, which has helped to deepen the young man’s faith.

“We have had many conversations with Cameron, and we have been very real and open about our struggles to understand how this can happen to him. We have grappled with the questions of ‘Why us?’ and ‘What is this for?’ and so on. Cameron has been able to see that it’s O.K. to have questions and still, in the end, rely on the fact that God is in control and will use this for his glory, even if we can’t understand right now.” 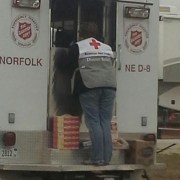 To hurricane survivors, The Salvation Army is a daily blessing
%d bloggers like this:
Scroll to top