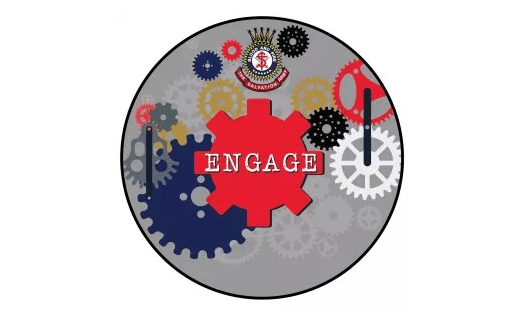 Steve Carter, the noted pastor and speaker, has become a familiar figure at Salvation Army gatherings in recent years, and his appearances at those gatherings have in turn afforded him a unique perspective on the Army. Carter, the featured speaker in the opening session of the Engage Conference held May 31-June 1 at Atlanta Temple Corps, said his affection for the Army and his alignment with its mission continues to grow.

“I look at the Army, and I see Jesus,” he said. “You have something really special. So I have one question: Why do you keep it to yourself?”

The Engage Conference brought together officers and soldiers from across the USA South. It followed last year’s Ignite Conference, which addressed The Salvation Army’s need to reconnect with its “WHY,” its mission of saving souls. Commissioner Willis Howell, territorial commander, had opened that conversation in 2018 by noting that the Army had become too preoccupied with its WHATS and HOWS and had lost touch with its WHY – its passion for winning people to Christ.

Engage was a gathering to help reroute the Army back to its mission of witnessing to a hurting and despairing world outside the doors of the corps. “We need to re-engage,” Commissioner Howell said. “There literally is a world dying out there. And they’re not beating our doors down. So I had this crazy idea. Why not go where they are? Why not engage them? We have a cause to fight for. We have a Savior to live for. Why wouldn’t we want to engage people about that?”

To help redirect the Army back to its heritage of soul-winning, speakers in breakout sessions addressed issues central to evangelistic outreach: the role of discipleship (Commissioner Phil Needham), using our social services outreach as an avenue for witness (Lt. Colonel Dean Hinson), reconciling cultural differences (Dr. James Logan), living an invitational life (Carter), the challenges of witnessing in contemporary culture (Envoy Steve Bussey) and the opportunity for engaging through the Army’s innovative Pathway of Hope initiative (Mindy McCormick).

Carter keynoted the opening session on Friday evening, and Bussey of the USA Eastern Territory was featured in Saturday afternoon’s closing session. Carter addressed how Scripture calls believers to engage with the world and win disciples for Christ.

Bussey and his wife, Sharon, are co-directors of the Eastern Territory’s Salvation Factory, which seeks to explore innovative concepts and techniques for use in the Army’s mission. In his closing session address, Bussey stressed that the Army faces formidable challenges by the complex and volatile culture it is called to lead to salvation. The good news is that The Salvation Army was built to be innovative and adaptable, that it was designed for stability while allowing for agility and flexibility

“We are made to adapt – it’s built into our DNA,” he told attendees in his breakout session. “We need a creative approach to spiritual warfare.”

Bussey’s closing message – titled “Purposefully Pivoting/Engaging Our Why” – called for the Army to resolve any questions about its identity and its purpose of saving souls. Additionally, it must be willing to constantly try new approaches (“William and Catherine Booth were always trying new things, and if they didn’t work, they would end them and try something else”) and establishing new ministries without being defined by them.

Territorial Sergeant Major John Reeves, who led Saturday morning’s devotional, challenged the Army to “boldly go where no man has gone before,” just as the crew of the Enterprise did on TV and in the movies in “Star Trek.” He said the bold proclamation of the gospel should be the driving passion of the soldiers of the South.

The two days of Engage concluded with a question-and-answer session with a panel of four: Commissioners Willis and Barbara Howell, Reeves and Jeremy Rowland, the assistant territorial sergeant major. Questions and comments touched on outreach to youth and young adults, the interlocking roles of corps officers and their soldiers and overcoming the fear of rejection in witnessing. The territorial commander was also asked what expectations the South’s leadership has for engaging the WHY.

“What are we looking for? Act. That’s all I’ve got. You are the sum total of The Salvation Army within the circle in which you move,” Commissioner Howell said. “If all you do is walk out the door today thinking about what a great conference we had, then we’ve fallen short. I want you to infect others with what you’ve been given here. The minute you walk outside, I want hell to tremble. That’s the challenge.”

Messengers of Compassion called to action

Charlotte Emergency Disaster Team Steps In to Support Neighbors in Flooded Riverside...
%d bloggers like this:
Scroll to top