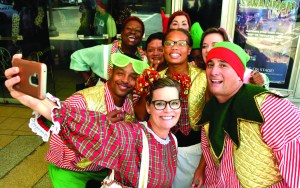 Elfies help The Salvation Army of Savannah, Georgia get a jump on Christmas

Santa’s elves decked out in red and green and jingle bells are a little off season on a hot July day in Savannah. Yet grabbing people’s attention to tell them about The Salvation Army was the point of a recent “Elfie” campaign in the coastal Georgia city popular with tourists.

“We said, why don’t we do something fun in the summertime?” Haskell said. “It’s a notoriously slow period. There are a lot of folks in town, and there’s no other nonprofit working on anything at the time. How do we get something up on social media, get people engaged?

“We said, let’s get some elves on board and make some magic.”

The Elfie campaign – as in, Take a Selfie with an Elfie – was born. It would be part of an overall “Festive Fun in the Sun” effort to spread the word about The Salvation Army’s works and line up support for the 2019 Red Kettle Campaign.

“We started the whole thing the first of July with little news bits mid mornings on WTOC,” the local CBS affiliate, Haskell said. “On Monday, July 8, we started at 5:30 a.m. giving major interviews on WJCL about what we’d be doing. And we had staff members dress up as elves – I was one of them.”

The elf brigade was joined by students from area theater groups as they engaged residents and visitors around Savannah, Pooler and Tybee Island the next four days. People were invited to snap selfies with the elves and upload them to the Savannah Salvation Army Facebook page with the hashtag, #elfieSAV.

Those who did so by 3 p.m. Thursday, July 11, were entered into a drawing to win tickets plus lodging to an Atlanta Braves game. More than 2,000 entries were received, said Major Paul Egan, corps officer in Savannah.

Salvation Army Services Reinforced From Cities Across Kentucky And Tennessee

Tell Me Something Good

Doughnuts help The Salvation Army tell the gospel story in Danville, Kentuc...
%d bloggers like this:
Scroll to top