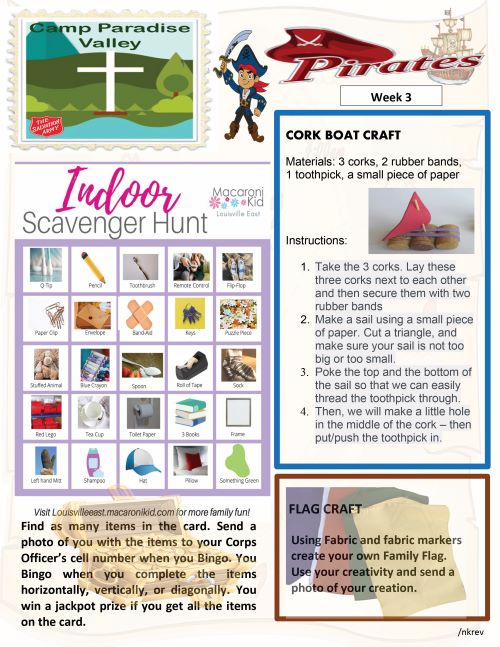 The Salvation Army Southern Territory has long offered summer overnight camps and music conservatories to young people; yet each division in recent weeks has had to decide whether to have any camps at all this year. The decision has not been an easy one.

Given differing local, state and national public health guidelines in response to the COVID-19 pandemic; the rigorous social distancing, small-group isolation and cleaning rules for youth activities; and how far along a state might be in recovery and reopening, “it’s a very complicated onion to peel,” said Caleb Louden, territorial youth character-building and camp program director.

Nationwide guidance from the Centers for Disease Control and Prevention and American Camp Association was late in coming this spring. Camp sessions that had not been canceled outright “were pushed further into the summer and for a shorter amount of time,” Louden said.

The Kentucky-Tennessee Division, for example, will have only a senior music conservatory, in July, at Camp Paradise Valley. However, the division has launched a “Camp Paradise Weekly” series on Ministry Toolkit, with a live broadcast each Tuesday through the summer for youth, along with printed resources.

One week’s activity sheet, with a “Pirates” theme, offers an indoor scavenger hunt; creating a family flag out of fabric and fabric markers; and making a cork boat out of cork, rubber bands, paper and a toothpick. Children are invited to send in photos of their work.

“Adults can stay connected to each other during this pandemic,  but for young people, it’s a dire time to keep them engaged with our programs and with Jesus Christ especially,” said Daniel Meeks, Georgia divisional music director.

In Arkansas -Oklahoma, if children can’t come to camp, the Youth and Music departments will take camp to the children. They’re creating a “Traveling Road Show” to bring one-day camps to 13 of 26 corps and possibly some Salvation Army Boys & Girls Clubs in July and August.

“The aim is to let kids experience Jesus through music and Bible education,” Louden said. “They’re building on existing praise and worship teams, and they’ll also be giving private lessons.”

Captain Matthew Satterlee, Florida divisional youth secretary, said in an email to corps officers that “depending on the time of the different phases (of) reopening, we do have a plan for rolling out some very cool summer programs that will be coming to a corps near you.” The Youth and Music departments will split up and visit every day camp and Vacation Bible School they possibly can. Captain Satterlee was recently appointed to National Headquarters as the assistant to the national program secretary.

“It’s basically summer, flipped upside down,” said Captain Jamie Satterlee, then Florida divisional youth and divisional candidates secretary. “Instead of all the kids coming to us, our team is going to them. We are also doing a virtual conservatory and a virtual leadership development program for music.”

Captain Bill Mockabee said the Texas Division is conducting a “virtual camp experience,” Hoblitzelle@Home. It’s a combination of live meetings, using Zoom video conferencing software, and prerecorded material hosted on the Texas Division website. Camp crates are being sent to each camper with supplies to participate in counselor-led activities.

“The first week is now well under way with a combination of corps kids and Junior Conservatory who are learning the musical, ‘Under God’s Sea in 3D,’” said Captain Mockabee, who served as Texas youth secretary before his recent appointment as Central Arkansas area commander. “The kids will be recorded individually, and the individual videos, compiled to have a musical that will be posted on the website.”

Community camps and Senior Conservatory are set for Week Two, with 129 young people registered. “We are excited that we are still able to connect with these campers and the possible impact that we can continue to have,” Captain Mockabee said.

The Territorial Music Department, meanwhile, is working with the Alabama-Louisiana-Mississippi Division on a one-week virtual music camp, July 6-10.

A morning devotional for everyone will be followed by breakout Zoom sessions for brass, percussion, creative arts and worship teams, with opportunities for social interaction among campers, said Robert Snelson, territorial music education director.

“Our team has written Bible studies and lessons and curated videos to go along with the snack, recreation and craft segments of VBS, as well as videos to accompany the Bible lessons,” Captain Cancia said. “We’re pushing them out to corps and the division in the coming weeks; the idea is the whole division gets to be a part of Virtual VBS the last week in June and first week of July.”

As in Texas, Georgia’s Junior Music Conservatory campers will perform in a “virtual musical.” It’s based on “We Can Praise,” performed at camp several years ago; essentially, individual children read simple lines and Scripture verses and do a little “armography,” and then it’s all put to music in a single performance.

“Essentially, we’ll send lines to our kids, and they’ll send videos back to us reciting their lines,” Meeks said. “We’ll also have the kids do choreography videos, and they’ll return them to us, too. We’ll take all the videos, put them together and come up with a piece we can share to social media and our corps.”

The Virtual Senior Music Conservatory will follow a traditional schedule – a praise and worship time featuring different groups from the division, followed by a devotion and, during the day, private lessons and a virtual choir rehearsal.

“We will work with each student to come up with (an instrumental) solo they can record and send back to the Music Department,” Meeks said. “We’ll put an accompaniment to it, and we’ll send it back to their corps and to the youth to have as a keepsake.”

“This is new territory we’re all dealing with,” Meeks said. “Honestly, we’d rather be face to face with each of our young people. The biggest thing our youth will miss this summer is the fellowship with their friends at camp. At choir time, we’ll give everyone a chance to interact during the Zoom session, so they can get the fellowship they’re missing.”

Young people will access VBS and the conservatories from home, through the internet. For those whose families do not have online access, Captain Cancia said, “we’re working with their corps to be sure they’re part of a day camp or corps programming, so they can participate from the corps.”

The Georgia Division also will roll out “Fri-Yay,” a twice-monthly social media event for young people with snacks, crafts and an activity. “Our department has produced an instructional video showing families how to do it,” Captain Cancia said.

It’s critical, in times like these, to keep youth connected.

“The young people of the Georgia Division are our congregation,” Captain Cancia said. “We want them to know they are loved, that they are cared for. We went them to know there’s still a place for them even in the midst of this separation.”

The Salvation Army serves up ‘Sacks of Love’ and encouragement in Muskogee, Oklahoma

In these times of stress, Salvation Army tends to physical, spiritual needs