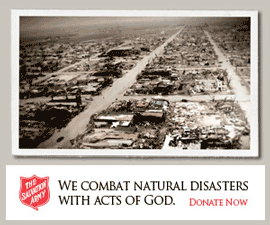 Dallas, TX (May 15, 2013) – The Salvation Army quickly responded in the North Texas communities of Granbury and Cleburne after tornados caused significant damage and injuries late on Wednesday evening.

Further updated information will follow as it is released.