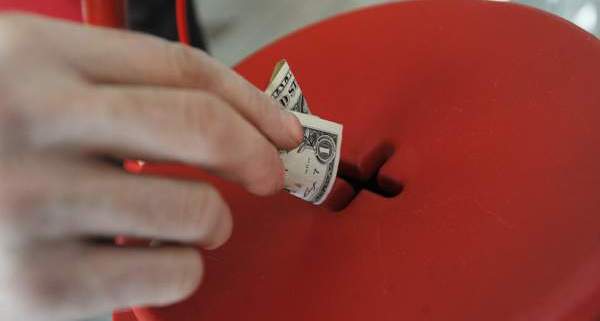 APPLETON — Salvation Army officials say community teamwork was a highlight of its 2013 fundraising campaign, even as efforts continue to reach the $1.2 million goal.

The Salvation Army-Fox Cities announced the final results of its red kettle match days, during which companies and other Fox Valley institutions pledged to meet donations of those stuffing the kettles. Through nine match day partnerships, the Salvation Army exceeded half of its overall goal, taking in more than $634,000 to benefit its year-long social service programming.

The organization is still about $180,000 short of its campaign goal and will seek contributions until the end of January or until the goal is met.

Waugus said the match days were significant in several ways. They showed the dedication of the businesses and organizations in the community. They also prompted generosity and awareness of community members who made the most of the opportunities.

Each of the days exceeded the donation amount the groups pledged to match.

Thrivent Financial for Lutherans pledged $125,000 toward a Dec. 6 match day, which led to the largest single day of the campaign. The community contributed more than $140,000.

The Community Foundation for the Fox Valley Region pledged $50,000 in matching funds on Dec. 23. The community came through with more than $76,000 at the kettles, which marked the second largest day of the campaign.

The Fox Cities’ Salvation Army corps has participated in match day partnerships for 10 years. Waugus said it’s become a model for corps across the country.

Curt Detjen, president and CEO of the Community Foundation, said the number of groups that participated in match days is a testament to the region’s willingness to meet needs. The strength of the community becomes even clearer when considering the generosity also shown to the United Way’s campaign and to Post-Crescent Media’s “Stock the Shelves” effort.

“The Fox Cities area is full of people who genuinely care about their neighbors,” he said.

Haiti Four Years Later: Encouraged by Progress and Hopeful for the Future
%d bloggers like this:
Scroll to top