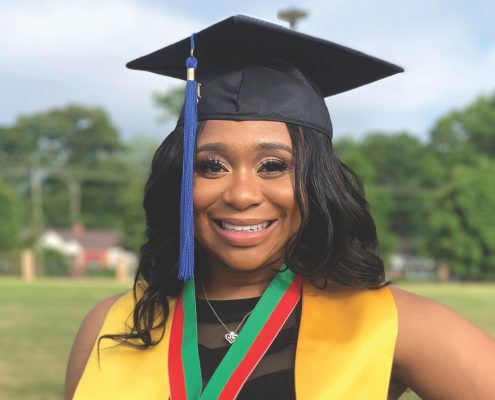 When Chantil Coleman’s father left her family when she was a child, The Salvation Army Bellwood Boys & Girls Club in Atlanta, Georgia, was there to help.

“The Boys & Girls Club became my second home; they took me and my mother and brother at a time when we were at our lowest,” said Coleman. The club provided food, financial assistance and emotional support for her mother.

Coleman started with the club at age 7 and blossomed in its programs. She took dance classes, played basketball, volleyball and tennis, and cheered. In 2012, at age 18, she won the title of Boys & Girls Club Georgia Youth of the Year. Now 25 years old and in graduate school, she was announced recently as the keynote speaker for the club’s Great Futures Start Here fund-raising banquet

“They literally took us in as family and made sure we were supported physically, emotionally, spiritually, financially, just the whole realm,” Coleman said. “The club even gave me my first job. At the age of 13, I was the membership clerk’s assistant. I sat at the front desk, greeted people and took membership applications.”

She is grateful for club people like Patrice Holt, former learning center instructor and program director; Charlie Smith, club director, now retired; and Lillien Byrden, a former arts and craft instructor who is today program coordinator. They made sure that “when it came time for SAT prep and college applications, I was there.”

Coleman attended the Atlanta Public Schools from kindergarten through 12th grade and graduated from Henry W. Grady High School in the top 10 percent of her class and as a Gates Millennium Scholar.

In May 2019, she was awarded a bachelor’s degree in criminal justice and an associate’s degree in political science from Atlanta Metropolitan State College. She is now a graduate student in the Masters of Public Health program at Mercer University, Atlanta.

Coleman volunteers at the club, doing speaking engagements and serving as a STEM program mentor. She recently spoke to 10th graders about continuing their education beyond high school.

“Being from the west side of Atlanta, I showed them your environment and your predicament doesn’t make you, and you can make something out of that,” she said. “I feel that’s something the Boys & Girls Club instilled in me.”

Byrden said, “Chantil is awesome. You have those kids, from when they start all the way through adulthood, you just know they’re going to be something great. She always put 100 percent into everything.”

Even now, Byrden said, “she asks me, ‘Is there anything I can do? If you want me to come talk to the kids, to come in and help out, I’m there.’ I’m like wow, this girl has so much on her plate. She’s in a master’s program, she’s doing a study abroad. With all she’s doing, she’s a great example to our teenage girls – that it doesn’t matter what happened before, it’s what you do afterwards that matters.”

Coleman’s goal is to one day sit on the board of the Boys & Girls Clubs of Atlanta, as her late grandfather Robert Snow did.

The Salvation Army providing services to refugees in Texas

Hartford Hub is Humming Along, Providing Much Needed Food Amid COVID-19 Pan...
%d bloggers like this:
Scroll to top