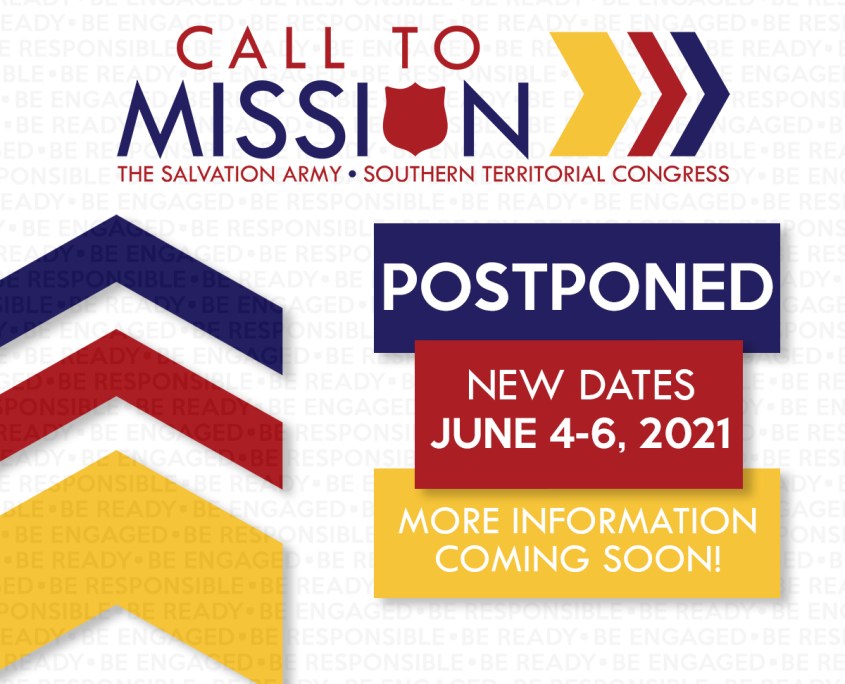 Call to Mission Congress postponed until 2021

The Call to Mission Territorial Congress scheduled for June 5-7, 2020, in Atlanta has been postponed until 2021, according to an announcement made by Commissioner Willis Howell, Southern territorial commander. The postponement is a result of the uncertainty created by the global coronavirus pandemic.

Although the congress will not be held this year, the territorial commander said plans are to hold it June 4-6, 2021. The venue – the Infinite Energy Center in the Atlanta area – will remain the same. Notably, The Salvation Army’s international leader, General Brian Peddle, and Commissioner Rosalie Peddle have agreed to be the featured guests at the 2021 event, as they were scheduled to be this June.

“Quite simply, we believe it’s the responsible thing to do given the uncertainty and challenges so many are facing right now,” Commissioner Howell said.

The territorial commander added that options for commissioning activities for the Messengers of the Kingdom are being examined now by the territory’s leadership. The commissioning and ordination of the session were scheduled to be held on the final day of the Call to Mission Congress.“

To be sure, we will still be having Commissioning – of some sort,” Commissioner Howell said. “But by necessity it will likely look very different.”

Commissioner Howell added that other scheduled territorial events in the near future might well be affected by circumstances created by the public health crisis and that announcements will be made as decisions are reached.

The wonder of God’s mysterious working

The Salvation Army To Provide Meals for Hospital Staff In Milwaukee
%d bloggers like this:
Scroll to top