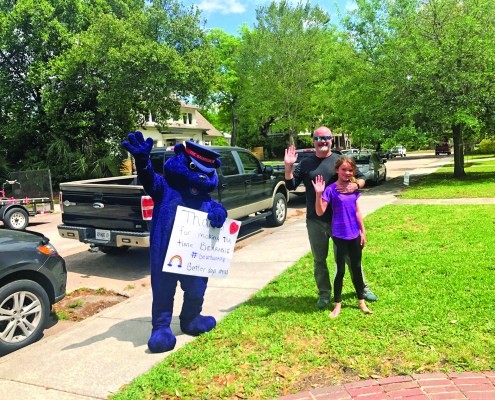 A furry, man-sized apparition was seen walking the streets of Savannah, Georgia, recently – not Bigfoot or Sasquatch, but a big blue bear wearing a Salvation Army officer’s hat.

“To be frank, I was tired of bad news and difficult situations and just wanted an afternoon of fun,” said Major Paul Egan of the Savannah Corps.

With the outbreak of the COVID-19 virus, Major Egan could not return the bear costume he had borrowed from Southern Territorial headquarters. So, he put the costume on and went to visit some children – at safe remove for “social distancing,” of course.

“We’d heard about ‘bear hunts’ going on in communities across the nation” – families walk around their neighborhoods, spotting teddy bears put out at people’s homes – “and April 1 was coming up, and I thought, what if the bear went and thanked some of the people doing these things in their communities?”

The Territorial Youth Department in Atlanta had loaned Big Blue Bear – yes, that’s its name – to the Savannah Corps last year for its 10,000 Scoops Challenge, a community ice cream social and fund-raiser. Big Blue came out again for the Red Kettle Kick-Off. The corps intended to return him, one of these days, but one thing led to another and the costume never made it home before the coronavirus pandemic in March shut down nonessential travel in Georgia.

The bear has been a children’s celebrity for 20 years, according to Sheila Livingston, territorial Christian education and youth discipleship director. He and Junior Soldier Girl have appeared at youth rallies, summer camps and community events.

“Big Blue Bear is from the International Congress of 2000,” Livingston said. “Junior Soldier Girl is probably five or six years old; we got her for a Junior Soldier event at a commissioning.”

On Wednesday, April 1, Major Egan said, “we walked around the neighborhood between our two buildings, the corps and the shelter. We also went out to the Farmer’s Market truck that parks in front of our building every Wednesday.”

Big Blue waved to families picking up meals provided by the Second Harvest Food Bank while school is out, and to women and children recently moved to a temporary shelter in the corps community center, where they have more space for social distancing (men remain at the main shelter). The bear carried a sign, “Thanks for making this time Bearable,” with the hashtag, #bearhunting.

“When we approached houses and waved at the families inside, they got it pretty quick by the poster we were holding up,” Major Egan said. “They all wanted to get pictures of the bear. We were happy for that. We’re trying to be good in Savannah not to put crowds together, so we’d see one family at a time and made sure everyone kept their distance.”

“One lady thought it was great. She expressed her disappointment to us that her grandkids were quarantined away from her and couldn’t see us.”

What’s next for Big Blue? “Easter will be a real time of disappointment for folks not to be together in large church services,” Major Egan said. “I hope we can bring the bear out again to help people find a way to safely enjoy life.”

Bill Burke is our Next National Advisory Board Chairperson

A Network For Good in Robeson County

The Salvation Army Continues to Meet an Expanding Need in the Face of the COVID-19...
%d bloggers like this:
Scroll to top