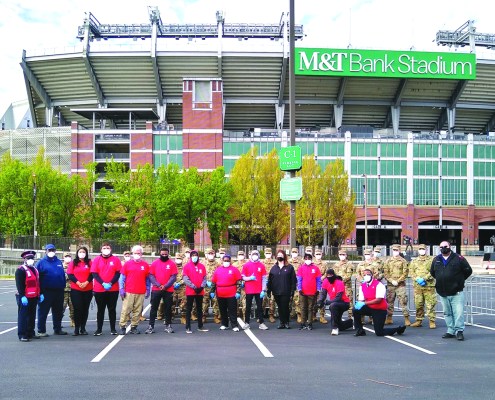 With the COVID-19 outbreak, The Salvation Army of Central Maryland in March saw its food warehouse – typically stocked to last for a month – depleted in two days. It became evident a large-scale need for meal assistance was imminent.

As part of the Food Insecurity Council of Baltimore City, the Central Maryland Area Command became aware of the most underserved group: homebound older adults.

The Baltimore City Department of Aging agreed and, having exhausted its own resources during this crisis, delegated to The Salvation Army the task of feeding 5,000 senior citizens— vulnerable and quarantined persons who are physically unable to venture out.

The area command, with the help of Captain Jonathan Howell acting as the director of operations for the Divisional Incident Command, put together a collaborative plan to lead what has become its biggest feeding operation to date.

Given the effort’s scope and complexity, The Salvation Army turned to local partners to maximize the impact value of its work.

The Baltimore Ravens were among the first to step up and the most generous to date: The football team gave the Army $100,000 for its feeding initiative. They brought into the conversation the Maryland Stadium Authority, which made Parking Lot “C” of the Camden Yards Sports Complex available for staging; there, two refrigerated trucks donated by Perdue Farms store meals prior to delivery.

The Army partnered with ROUGE Fine Catering to prepare up to 10,000 meals a day – 5,000 cold lunches and 5,000 microwaveable dinners to be delivered Monday through Friday.

Twice as much food is prepared Thursday and Friday to ensure there’s enough to last through the weekend, said Melin Sotiriou-Droz, community relations manager. Meals go to vulnerable seniors living independently, as well as 145 senior living facilities and housing complexes referred through the Department of Aging’s LEAN Campaign and Maryland Access Point.

“In a crisis like this where everybody is affected, it can be tough to find people to help,” said Lieutenant Antiono Willis, site commander. “To have the Ravens just say, ‘This is totally on us. Just do it,’ that was blessing No. 1. Then to not only give us the parking lot, but to be part of the hope with the financial contribution, it put the icing on the cake.”

This community effort is fueled by volunteers who accompany the drivers in vehicles provided by the Baltimore City Department of Transportation. In addition to their generosity, the Ravens, joined by the Baltimore Orioles baseball team, Towson University, and others, put out a call for helpers through their social media channels.

The Salvation Army thanks the Ravens for leading the charge to support the program. Their “play by play” involvement during the preparation and execution of this operation, extending their infrastructure, agency contacts and financial support, and mobilizing their ‘Ravens Flock’ network of fans, help boost not only the community’s morale, but its well-being.

“The Ravens,” Lieutenant Willis said, “are our hometown heroes more than they can ever know.”

To Battle We Go: A cry for help that must be answered