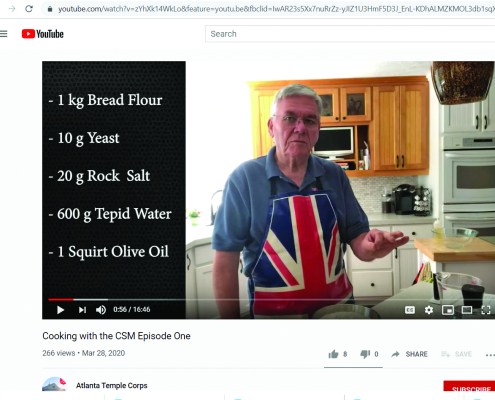 Like churches everywhere, The Salvation Army Atlanta, Georgia, Temple Corps is closed for the duration of the COVID-19 emergency. Emma Edelman, the corps program director, was seeking ways to keep members connected online when she thought of her father’s love of cooking.

Not just any cooking – British cooking. Edelman’s father is Chris Priest, territorial director of communications and a native Britisher who knows his way around a kitchen.

“Emma came up with the idea of ‘Cooking with the CSM’ (Priest is corps sergeant major) because she knows I do most of the cooking in the house,” Priest said. “She said, how about it? And I said, yes, we can do English stuff maybe a lot of people wouldn’t know much about.”

Edelman, whose master’s studies include video production, shoots the show in the Priest family kitchen, edits it, adds professional titles and music, posts it to YouTube and links to it from Facebook.

The first episode was baking a British “bloomer,” a bread made English-style, without sugar. It can be viewed here.

The second episode was an English roast dinner. “It’s very traditional, usually served on a Sunday, consisting of a cut of roast beef, roasted potatoes, a variety of vegetables, mainly root vegetables … and the crowning glory, the Yorkshire pudding,” Priest says in the video.

The roast beef and Yorkshire pudding are famous around Temple Corps. Priest prepares a feast for upwards of 40 or more people every November as an incentive for corps members to volunteer to put up Christmas decorations. He’s also served his Yorkshire pudding to the Cabinet.

“I’ve always wanted to do this,” the sergeant major said of the cooking videos. “A lot of our friends back in the U.K. are cheering me on. Folks who know I cook are encouraging as well. A friend of ours in Arizona baked some bread and sent us a picture; she did extremely well with it.”

Priest said his culinary talents may come from his maternal grandfather, a master baker.

“He served in World War I, was imprisoned by the Germans for a while, and was released when the war was over. He decided he was going to start a bakery and was very successful; he had a couple of baker’s shops, baking and delivering bread. Other people in the family think I have that gene for cooking and bread-making.”

What’s next on the menu? “Shepherd’s Pie next week, and Toad in a Hole for Episode Four,” Priest said. “We’ve got three others to go after that – they’re not finalized yet. Someone suggested fish and chips. Perhaps a curry dish. Perhaps some other British dishes you don’t see over here.”

Columbia, S.C., corps is taking its Sunday school to the community

To Battle We Go: ‘Maybe you can be one of us’

EMBRACE: A covenantal commitment to a journey to end racism

The Salvation Army Distributes Care Packages to Isolated Community in Northeast...
%d bloggers like this:
Scroll to top