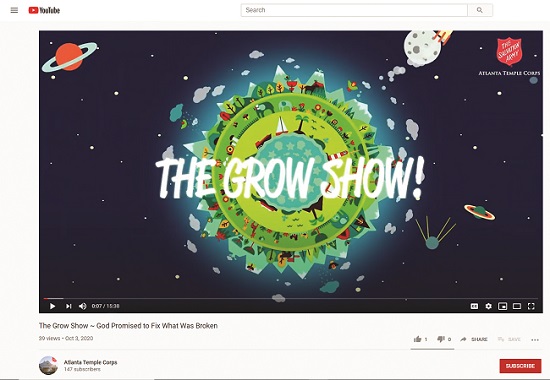 The Atlanta, Georgia, Temple Corps of The Salvation Army took delivery this spring of a new youth discipleship series, The Grow Curriculum, and was all set to start using it with the 100 children at its Wednesday night kids’ ministry. Then COVID-19 happened.

“We tried to figure out how we could still use the curriculum when we couldn’t bring children into our building, to make it meaningful and impactful and give them the lessons they needed,” said Emma Edelman, corps program and ministry director. “We decided, let’s make a video series.”

Other corps members come and go in the 12 shows, each 15 to 20 minutes long, planned through December. The videos were recorded in the Communications Bureau studio at territorial headquarters next door to the church, then edited by Temple staff.

One episode, for example, is “God Promised to Fix What Was Broken.” The Scripture memory verse is Joshua 21:45 (NIV): Not one of the Lord’s good promises to Israel failed. Every one was fulfilled. The video recaps the Genesis account of Adam and Eve in the Garden of Eden – how everything was perfect, and how everything became broken when Adam and Eve sinned.

“Thank goodness we have a God who continues to repair our broken world,” Captain Alyssa Irvin, assistant corps officer, says in the video. “God promised to fix what was broken. … We know from reading more in the Bible that God had a plan all along for fixing people’s relationship with God, the one that was broken when Adam and Eve disobeyed – because that’s who God is.”

Edelman said, “The Grow Show is probably 60 percent (Grow Curriculum), while the other 40 percent I adapted or wrote from scratch, knowing the needs of our kids.”

A new video goes up on YouTube every Saturday morning; children and parents can watch it before Temple Corps’ mobile ministry sets up Wednesday evening at a local park. Through October, they’ll be accompanied by six cadets and two officers of a Mission and Ministry Team from Evangeline Booth College.

Blankets, socially distanced, are put out for kids and adults to sit on, and families currently registered – many live in apartment complexes within walking distance – attend each week. “It’s a great opportunity for us to hang out and meet with parents and get to know them better,” Edelman said.

There’s music, prayer, snacks and questions from this week’s video, all intended to dig deeper and grow disciples. Kids who’ve viewed the video and brought their Bibles get a card punched to qualify for prizes to be awarded at the end of this fall’s session.

Thirty-five kids ages 7 to 12 show up every week; another 15 youngsters who can’t make the outdoor meeting are signed up for a virtual Zoom call on Thursdays. The program will go through December, “then we’ll reevaluate,” Edelman said.

The videos may continue even if corps meetings resume and children can again get together in the Atlanta Temple building; they’d be a teaching element. “Kids’ attention is much more focused watching a video, than on us just standing in front of them,” Edelman said.

“With COVID, we were nervous how well the videos would be received and if parents would commit to it,” she said, “but we’re excited how it’s worked out.” 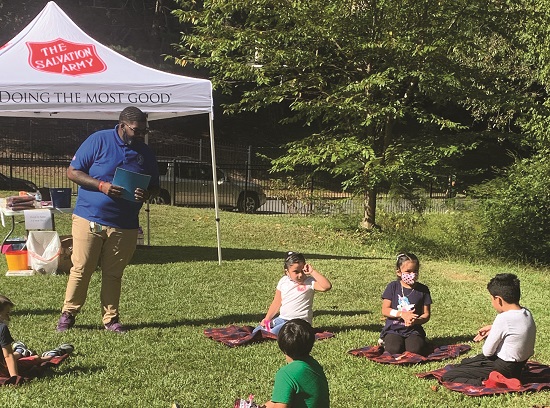 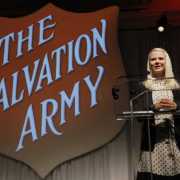 Elizabeth Smart: ‘I found something worth living for'

The Salvation Army stands in the gap in trying times

The Salvation Army Continues Aid and Comfort in Tornado-Stricken Georgia

Miriam Musgrave: The girl who stopped a revolution Head represents Army in government discussion on human trafficking
%d bloggers like this:
Scroll to top