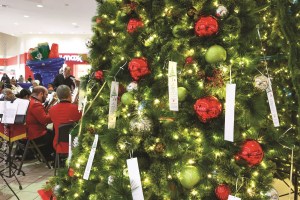 Forty years ago, in a small city on the James River in the mountains of western Virginia, two Salvation Army officers came up with a new way everyone can have a role in Christmas charitable giving – and in so doing, changed the world.

“I am amazed. That’s all you can say,” said Lt. Colonel Shirley White, now retired. “It’s a hand of God thing, for this to work so quickly to help so many people. It was just an impossibility to think it would go this far. Now, 40 years later – wow.”

As the 1979 holiday season approached in Lynchburg, Virginia, where Lt. Colonel Shirley and her late husband Charles White were corps officers, the management of the newly opened River Ridge shopping mall came to them with a dilemma.

“They had all these big trees in the mall and wanted to know if we had a way to incorporate them into our Christmas program,” Lt. Colonel Shirley said. “We had a toy shop where we provided children with toys, but the real need in the community was clothing.”

Inspiration came in a Hallmark store, in a greeting card imprinted with three angels.

“We thought, we could put the names of kids on this and the size of their clothing, and it would go on an ‘Angel Tree.’ We bought the cards and cut them apart, and the mall helped us type children’s names on the angels and put them on the tree.”

Each angel had the name of a child in need. Shoppers were invited to take an angel, purchase the items requested, and bring the gift to the mall. That first year, 472 children – “a number that’s etched in my mind” – were blessed with new clothes.

Word of the program quickly got around. By the second year, families were coming to The Salvation Army as well as the mall to sign up. “A family would say, we don’t have a bed for our child to sleep in, and one of our volunteers would say, ‘I’ll take that angel and get that child a bed.’ Then people started giving bicycles, toys and other things. It just got more and more involved.”

River Ridge Mall has had Angel Tree ever since. On Nov. 15-16, it kicked off the 40th Angel Tree and Salvation Army Red Kettle Campaign with a free concert by the National Capital Band, along with a tree lighting, cookie decorating and other activities. The Whites’ next posting as officers, in 1982, was to Nashville, Tennessee – the media center of the universe, if your universe is country music.

The Whites arrived in August and immediately proposed introducing Angel Tree to Music City. Advisory board members hesitated – it’s too late in the year to start a new program, they said – but the couple insisted they could do it. Radio station WSM, home of the Grand Ol’ Opry, came on board as the first Angel Tree co-sponsor. ABC Nightline heard about it and interviewed Lt. Colonel Charles; so did the Larry King Live radio show. Media across the country picked up the story. And the rest, they say, is history.

Lt. Colonel Shirley was the honored guest Nov. 22 to help light a 100-foot-tall LED Christmas tree billed as “the world’s tallest digital Angel Tree.” People can donate to Angel Tree through digital kiosks at the park, a GLOW app or by visiting the website, glowholiday.com/angeltree

“When its founders Lt. Colonels Charles and Shirley White introduced Angel Tree in Nashville, the concept took off like wildfire, and millions have now benefited from it,” said Major Ethan Frizzell, Nashville area commander.

“Lt. Colonel Charles White passed away earlier this year, but his legacy lives on,” Major Frizzell said. “During the holiday season, about 3 million people across the country rely on The Salvation Army to provide toys for their children on Christmas morning or a warm meal on Christmas Day.”

Today, Angel Tree is everywhere – with The Salvation Army, of course, and in churches, clubs, schools, stores, corporate headquarters and other places too numerous to count. There are Angel Trees for children, senior citizens and homeless residents; Angel Trees online, for those can’t make it to a mall; and Angel Trees overseas, from France and the Netherlands to the Republic of Georgia.

Angel Tree also inspired the 2003 song “Paper Angels” by country artist Jimmy Wayne, and a 2011 novel and 2014 movie by the same name. “He was a foster care kid who received his first guitar from the Angel Tree program, so now he tells his story all over,” Lt. Colonel Shirley said.

The Whites shared the lessons of Angel Tree with their own family. In Nashville, for example, there was a woman with three young children who had lost her job and whose husband had died, and one of her kids was ill.

“Our family always adopted another family at Christmastime, and we tried to involve our children in that,” Lt. Colonel Shirley said. “We made purchases for this family, the food and everything, and took it to them. The lady was just jumping up and down with joy; she couldn’t wait to get on the phone to tell her mother while we were there, she was so excited.

“Our children learned from that – to be generous and giving and always considerate of other families in need.”

The General’s message for Christmas: Good news that needs to be shared Family’s very special Christmas tree warming hearts in northeast Florida
%d bloggers like this:
Scroll to top